On my morning commute, yesterday, things went bad. It started at what is called, locally, the Fifth Avenue curve. A gentle sweeping arc that sends you from a warming southern drive seeming soft and kind casual and kind to a more western orientation looking at the tall buildings of business gone mad. Things get serious. You can almost hear the crackle and pop of an interspace communication. “Red Leader, assume attack formation.” Everything seems to start on the curve.

Yesterday, after passing 5th Avenue things slowed down. Slowed to a crawl. A crawl broken by stretches of a complete stop. Eventually, I made it past Leonard Avenue, the first exit west of 5th Avenue. A police car came screaming up the east bound freeway, crossed on the overpass and went accelerating down the westbound lanes. I could hear the roar of the engine over my music,  Summer in the City by the Lovin’ Spoonful. Which is one of my favorites, so it was kind of loud. I knew it was bad, then. 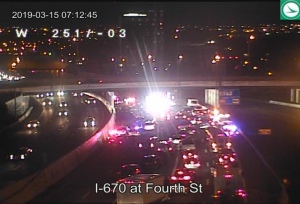 And it was. There was a horrible accident, multiple cars, multiple injuries. I didn’t know how bad it was, but it was obviously so bad my first thought was a silent prayer. Not the usual disgust for people who have to drive carelessly and wreck, ruining my commute. In fact it was so bad they closed the freeway, and I was forced to exit and wind my way through the downtown streets crowded with frustrated, detoured commuters.

The sun came up. It was weak, hidden with dark clouds. There was no rain in the forecast and none in the clouds. But, they were dark, ominous, heavy with something. Anger, sadness? Maybe they wanted to shed a few tears for the poor souls. Nothing more painful than impotent sorrow. It was a very uncomfortable morning. And, I have never been so glad when morning ended and the skies finally gave a little break. I know, occasionally, I see things for more than they are, and I am sure this was one of those times. It doesn’t take much imagination to make the connection, though. 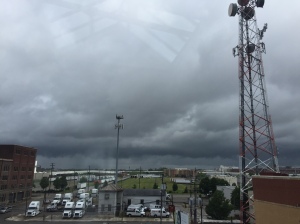 I looked online and it doesn’t seem as if anybody was killed. But, once the traffic is cleared it doesn’t seem to be news anymore. Though, I imagine those involved would feel differently.
This morning, though, I am comfortable, alone, with a cup of coffee, an iPad and my thoughts. I am mapping out the Nancy/Tim Casino Extravaganza. We are stopping at Jungle Jims, in Fairfield, the Party Barn in Louisville and a used bookstore in Dayton.  We may have to stop at Jungle Jims and the book store both ways.
I love used books. For one thing they are cheaper. More important, though, it is sharing a treasure with someone, somebody you don’t even know. In a way you have both lived somebody else’s life. Enter stage left, a new character, three people. Maybe several people owned and read the book.  It is a whole village, really. All sharing a story. I know people who only like new books, hard cover, fresh from the factory books. I like books with character, lived in books, loved books, hated books, books that have been around the block. Like me.
I have two books I have been looking for. It is a quest. I could buy them off Amazon, or Barnes and Noble but where is the thrill in that? They have become my grail. I am almost afraid I will find them. What then? There is always another foolish adventure, another pointless chase through aisles filled with the forgotten relics of modern life. It might be a book, it could be a Bluetooth keyboard for an iPhone, possibly a coffee cup with a particular companies logo. But, it is out there and I will find it, or at least look for it.
So, next week we are off to spend a couple of days in a casino. Not really in the casino, but in a room in the same building as the casino. We will go hiking through a state park. And, hike through the casino as well. We might even drop some coin on a game or two. Why not? And we will hike through the grocery store, and the used book store. You have to stay active, right? We love to hike.
And, I will hope the people in the awful wreck yesterday are ok. But, I probably won’t know. And I guess I can live with that, too.

Yesterday was International Women’s Day. A celebration for half (roughly) of humanity. In many cases, most cases, the better half. I salute the organization behind this idea. I am saddened that it is so necessary. But, it is. Women are not considered equals, not really. They are expected to do more and get less. And they’re expected to be happy about it. And that has to change.

Except for a few brief gigs at a supermarket and a hydraulics fitting warehouse I have worked for women for the last thirty years. If you think, even for a minute, they are not as tough as men you have never had to face down Cathleen telling you “I didn’t say you had to like it, Tim, I said you had to do it.” There was no room for interpretation. It was not negotiable. Her eyes said it all, there was steel and iron in her look. It was perfect. No hyperbole, no wasted motion, no posturing. She said all she was going to say. And I did it, but I didn’t like it.

I work in a place that is filled with women, and the owner, the on-site owner is a women. None of the women stop me in the stairwell asking me what I thought of last night’s basketball game. Followed, of course, by a lengthy explanation of the faults of these young men who have worked so hard to reach such an amazing level of excellence. Every guy is an expert at football and basketball, even if they haven’t played since junior high. 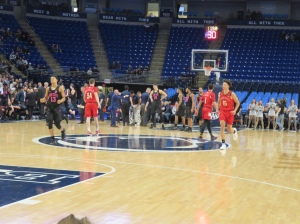 I am married to a woman. She is the most amazing person. She knows I see a lot of homeless people during a week, so she buys gloves, socks, scarves, stocking hats on clearance sale, or at the thrift store, washes them and stocks them in a tote bag, so I can easily hand them out. She loves to hear the stories about the guy who had holes in his socks and was so grateful for the new pair. She gives without fear, without show or display. Plus, she has put up with me for thirty years and that is not easy. I love my wife in ways I don’t even understand, in ways that still scare me, but she is only a person.

Recently, last night, in fact I bought an iPad Pro. A remarkable machine, fast, loaded with memory, and versatile. Unfortunately, there is no good Blogspot app available. I 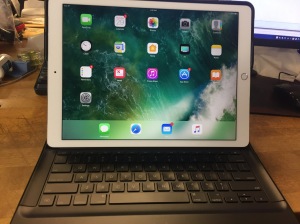 tried several. My readership, while never huge had dwindled lately anyway, so I thought `would give WordPress a try. This may be the first of many posts, it might be the last post. It might not get posted at all.

But, you have to try new things, even if it is only to find out the old things are still ok.

This is a text widget, which allows you to add text or HTML to your sidebar. You can use them to display text, links, images, HTML, or a combination of these. Edit them in the Widget section of the Customizer.
Loading Comments...
Comment
×